Task: Removing the carrier bearing hangers from the donor shell

The carrier bearings are the hangers that mount the driveshaft to the bottom of the car. the driveshaft tunnel is re-purposed on the front wheel drive cars for the exhaust, so y 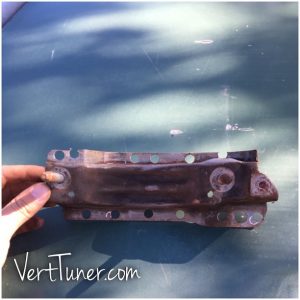 The exhaust brackets are just bolted on. I was able to get one side of with a shot of pb blaster, a 14mm socket, and a breaker bar. The otherside, however, rounded out on me. I was able to get it out using a special socket for rounded nuts. The is actually the nut I removed in the video for dealing with rounded nuts. You can watch that for an overview of how the tool works (as well as how a nut splitter works) and they’ll be a pair of Amazon.com links in the description to pick up a full set of them yourself.

Speaking of special tools, there’s one you might want to invest in for removing the carrier bearing hangers once you’ve removed everything in the way of them. Removing the hangers is just a matter of drilling out the spot welds that hold them in place. You can see in the picture on the right what one of the hangers looks like after it’s been removed.

Each of the circular holes in the picture is a spot where I’ve used a special tool, called a spot weld cutter, to cut around the spot weld. A spot weld cutter is essentially a miniature hole saw. Its a small drill bit with a spring loaded pilot shank and circular cutting blade. On some cutters, the blade is removable, so it can cheaply be replaced without having to replace the rest of the tool. You can tell where the welds are when the part is hanging because they are indented circles in flat part of the mount. My hanger was coated in surface rust, so it was easier to see them after running over the flat part of the hanger with a wire wheel.

You don’t have to use a spot weld cutter, but it saves a ton of time. You can use a regular drill bit and drill through each weld, but it takes longer and looks messier. I originally intended to do this to avoid spending more money on the project than I needed to, but I quickly learned it was worth the investment. I spent about 10 or 15 minutes going after the first spot weld with a drill bit and a pry bar. Eventually, I found a spot weld cutter that you can order replacement blades for. I was able to remove all the welds on the donor with just the 2 sided blade that came with it, but I ordered some replacements for removing the old brackets from the Spyder later in the project.

I made two videos showing how I used the cutter tools. The main video outlines how to use the tool per the instructions that came with it and the second is an update on an easier way to make the pilot indents needed for the cutter. Essentially, the instructions tell you to use a punch to make an indention for the pilot pin to sit in. I found it faster to take a small drill bit and just drill a little divot in to all the welds and then switch to the cutter. I found that the divots from the punch were too shallow and I’d still get a lot of sliding around.

Here’s the second video. As a bonus, there’s a little background on the exhaust hanger bracket that we take out in the dealing with rounded nuts video.